skip to main | skip to sidebar

Owls are symbols of wisdom, learning and preceptive insight, but also because they hunt at night, they are associated with secrecy and darkness. 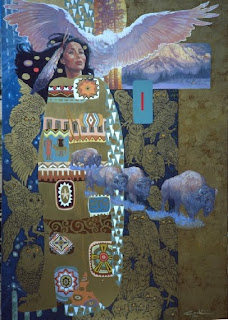 Owls as Totem animals
Owls are one of the native american totem animals and represent clairvoyance and insight. The Great Horned Owl is often referred to as Night Eagle. The owl is at home in the night and has great awareness of all that is around it at all times. It is a predator with sharp accurate vision and is symbolic of great intuition. It is the totem of those that can see into the spirit world. It has the courage to follow its instincts. Owl's medicine includes seeing behind masks, silent and swift movement, keen sight, messenger of secrets and omens, shape-shifting, the link between the dark, unseen world and the world of light.

The Celtic Goddess Arianrhod
Arianrhod was an important Welsh goddess, the mother aspect of the Celtic goddess. She was a star goddess, whose castle Caer Arianrhod lay in the Aurora Borealis. She was a goddess of beauty, the Moon, fertility and reincarnation.

In Celtic Myth the Goddess has three major aspects: the maiden, the mother and the crone. These three represent the three stages in life of a woman. Blodeuwedd is the flower maiden, Arianrhod represents the mother and The Morrigu at last is the crone.

Arianrhod was said to be able to shapeshift into a large Owl, and through its eyes be able to see into the dark depths of the human soul. The Owl symbolizes death and renewal, wisdom, moon magic, and initiations. She is said to move with strength and purpose through the night, her wings of comfort and healing spread to give solace to those who seek her.

The Greek Goddess Athena
In Ancient Greek mythology the Owl was a creature sacred to the Athena, Goddess of wisdom. Athena had an owl companion, which was said to reveal unseen truths. Athena was also a celebrated artisan and patron of craftsmen. Athena was said to have the power of shape shifting and would appear to mortals in the form of an owl.
Posted by thewakingdream at 05:13